The oldest building in the Hiskinmäki residential area. Cottage can be reserved for private events. Lue lisää ›

The area illustrates the end-19th century's efforts to connect inland waters by rail to the sea and to Europe. Lue lisää ›

Village of poverty, located in Rautionmäki, is an atmospheric museum area that can be rented for various events and celebrations. Lue lisää ›

The old cowshed at the historical Suojoki Manor has been converted into Kartano Kievari. Kartano Kievari provides professional party- and meeting services in a relaxing and unique environment. Lue lisää ›

Versatile services all under one roof open almost around the clock. Lue lisää ›

We offer drinks and fast food. Our location lets you socialize and enjoy your time with your friends and colleagues. Lue lisää › Café-Restaurant Wille offers delicacies in its cozy and atmospheric facilities, as well as a beautiful terrace with a park view. Lue lisää › Catering-, banquet- and lunch transportation service. Our own facilities are available in Kaislanranta, and we also provide catering services for other facilities on request Lue lisää ›

Food, accommodation and nature programs in the rapids. Lue lisää ›

Lunch restaurant in the center of Äänekoski Lue lisää ›

Natural center Onnenlähde rents premises for companies and organizations, as a meeting and training venues. in addition, we offer the possibility of self-catering accommodation. Lue lisää ›

Other accommodations, Conference and assembly halls

Bed and breakfast in a rural setting in the village of Liimattala in Konginkangas, a short distance from Finnish national road 4. Lue lisää ›

A cozy beach restaurant in a beautiful and historical environment in the port of Suolahti. Food and café services on the shore of Lake Keitele. Lue lisää ›

Hotel offers comfortable accomodations with a varied and rich breakfast. Guests can use the conference room in our premises. Cinema Kino Hirvi has two movie halls in the hotel. Lue lisää ›

La Kala opera operates in Sumiainen, in the middle of Finland, between of two lakes, in the most beautiful part of Central Finland. The acoustically stunning Opera can accommodate 100 people. The Central Finland Chamber Opera operates from the La Kala opera. La Kala performs a wide range of musicals, jazz, timeless classics, church music, contemporary music and rock in addition to opera. La Kala is known for its stunning quality both musically and visually. Lue lisää ›

We rent high-quality holiday cottages for living around the year in Riihilahti, Konginkangas, on the shores of Keitele. Lue lisää ›

Bar Hurmos and Hurmos Karaoke Bar are a pub, a nightclub and a karaoke bar located in the center of Äänekoski. Lue lisää ›

Accommodation service at an affordable price close to the nature. Pets are allowed. Lue lisää ›

At Pankkari, bowling is a new kind of experience. Lue lisää ›

Banquet and conference facilities for rent near the center of Äänekoski, by the water Lue lisää ›

A club and activity venue in the center of Suolahti, especially for social and health associations and other actors. Lue lisää › 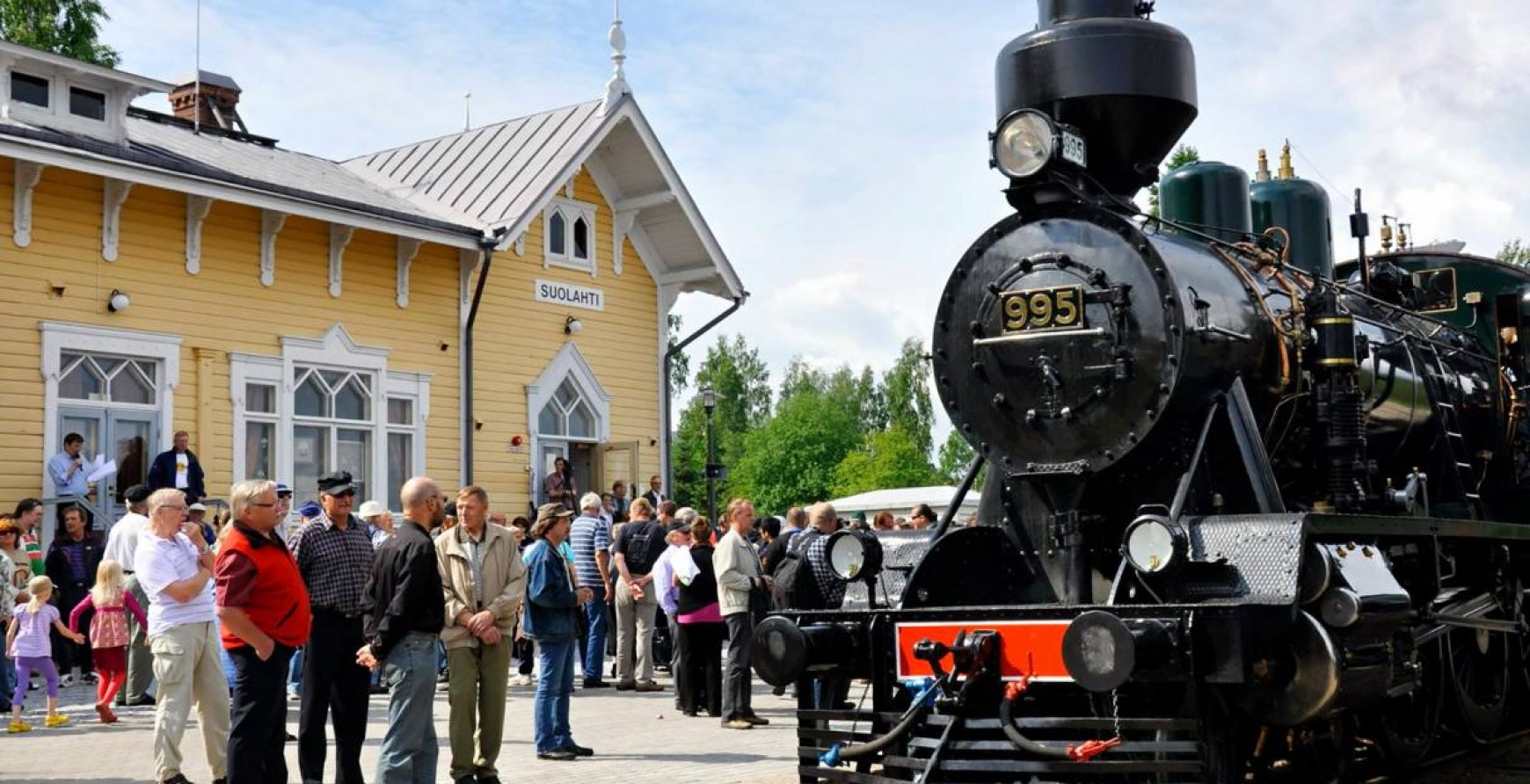 The area illustrates the end-19th century's efforts to connect inland waters by rail to the sea and to Europe.

In the courtyard of the station is a bronze sculpture, called "Lastaajat", made by sculptor Tapio Junno in 1982 for the city's 50th anniversary. The sculpture depicts the work of timber loaders from Suolahti.

The station building, designed by architect Bruno Granholm, with its surrounding yards, warehouses, locomotive stables and railway buildings, were completed as soon as traffic began in 1898. The station building was extended west in 1904, increasing the size of station's waiting rooms, offices and cargo space. Initially designed as a modest pier, it developed into an important station of the area.